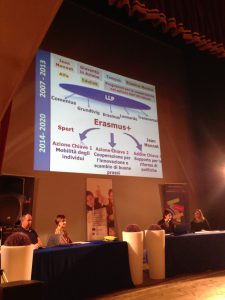 The Workshop focused on the topic of the concept of “territorial borders” and on how the latter changed with the passing of time. The topic was addressed starting from the evolution known by the dynamics of integration (particularly in the European frame) and globalization, characterized by a renegotiation of identitarian and cultural belongings, whose increased porosity and  blurriness stands in stark contrast with the rigidity (often of an exclusive, violent and intimidating nature) which accompained territorial demarcation lines in past eras.

In the above perspective, Berlin was chosen as an optimal setting, in light of it representing a microcosm, geographical and historic in nature, of the political and territorial dynamics typical of key phases of conflict in global history (with a particular reference to the Cold War).

During the workshop, participants discussed how to progress towards overcoming the concept of border in the future as well as reflected over the arbitrary nature of the distinctions brought about by territorial frontiers.