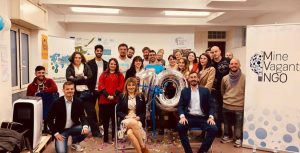 Mine Vaganti NGO celebrated 10 years of activity during the Europe Day Fest 2019.

The celebrations included a series of information activities about European programmes, an excursus of NGO origins and growth and presentation of the vision and strategy of the next 5 years.

During the 3 days, beisdes the address speech of to the two co-founders, there were as speakers collaborators and staff from all over Europe, aimed to share the growth and role played during the decade.

During the closing day, a new office area was officially presented and open to the general public.

The events were cheered by musical entertainment.

Video of  The 10 Years Celebration Event